Sam Caligiuri, who did a great job as acting mayor when Giordano was whisked off to prison, has announced his intention to run for a state senate position. The headline in today's paper was "Ex-mayor to seek seat being vacated in 16th District."

When I was eating lunch today, I overheard a college-age couple discussing the day's headlines. Their discussion of the Caligiuri article included comments like "Is that one of the corrupt mayors?" and "That's crazy--there's no way he could possibly win that." They also declared themselves unable to pronounce his name, and that they had never heard of him before, which suggests that Caligiuri's status as a former mayor of Waterbury has killed his political career. It made me sad to realize that there is such a deeply rooted assumption that Waterbury mayors are corrupt, and that the title "ex-mayor of Waterbury" immediately conjures up images of political corruption and immorality. I wonder how long it will be and what it will take to change that perception.
Posted by Raechel Guest at 4:55 PM No comments:

Christmas Lights on the Green 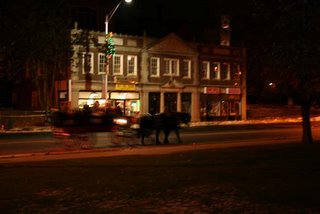 Horse & carriage rides are becoming a staple -- they had one in October at the Marty Gross event too. 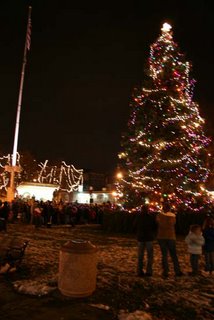 The lights were turned on when the crowd counted down from ten and shouted "hip hip hooray" three times. 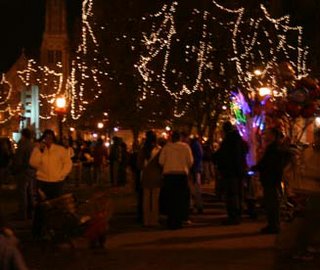 There were hot dogs, hot chocolate and plenty of lights! 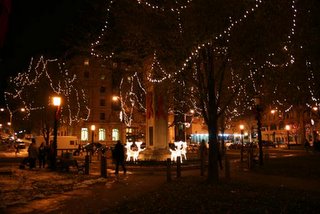 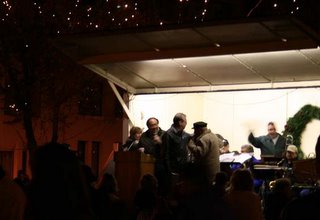 The band convinced the mayor to get out of the hot dog line and come up to the podium to sing "I'm Dreaming of a White Christmas" -- he got better after the first chorus.
Posted by Raechel Guest at 11:05 PM 1 comment:

I woke up this morning to the soft, muffled quietness the city gets when it snows. The holiday helped cut down on the number of cars on the road before 8:30am, so it was all very calm and peaceful. 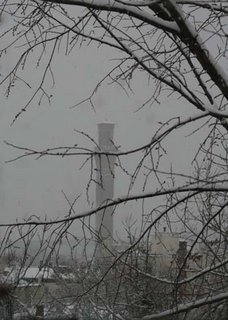 It looks very grey and dark in this photo, but it seemed much brighter at the time. 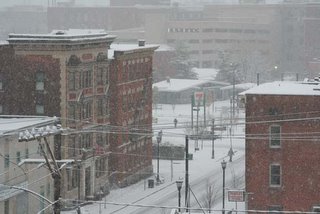 I was tempted to go for a walk around the city, but decided to stick to my original plan of cleaning the kitchen and cooking a turkey. 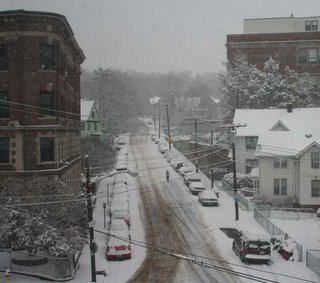 The sun came out by early afternoon, so most of the three or four inches of snow melted. It was beautiful while it lasted!
Posted by Raechel Guest at 10:12 PM 1 comment:

Email ThisBlogThis!Share to TwitterShare to FacebookShare to Pinterest
Labels: Weather

From today's Republican American article, "City aldermen to consider eminent domain": "'To me, a vacant lot is better than a vacant building,' [Michael] Gilmore said."

A lot of great buildings have been torn down and left as empty lots in Waterbury. Neglected empty lots fill up with garbage, weeds and tall plants that give junkies a nice sheltered spot for shooting up. Empty lots that are "maintained" are desolate, barren wastelands in the heart of the city. Waterbury is full of lots that have been vacant for years.

I don't know which are the 22 properties Gilmore wants the city to purchase and demolish. I can think of several examples of vacant and run down buildings that would be better as vacant lots, but I can also think of many more examples of abandoned buildings that should be restored as city assets.
Posted by Raechel Guest at 10:17 PM No comments:

Email ThisBlogThis!Share to TwitterShare to FacebookShare to Pinterest
Labels: Architecture

About a month or so ago, I noticed that there was a piece of pastry on the ledge outside my kitchen window. My apartment is on the third and top floor. There had been some extremely strong winds earlier in the day, so I assumed that the pastry was lightweight enough to have blown up onto the window ledge. 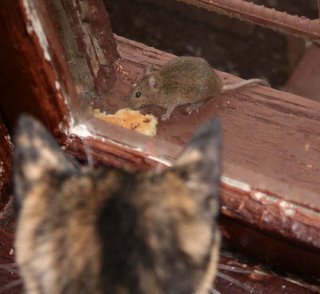 I also assumed that the mouse eating the pastry had somehow stumbled across it, or maybe the mouse had a really great sense of smell. The cat, of course, is very easy to explain, since she lives in my apartment. Incidentally, the mouse has one eye on the cat and one eye on his escape route.

A couple days ago, I noticed a large piece of chicken or pork sitting on the ledge outside the other kitchen window. 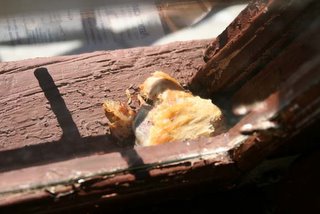 This one I can't explain. It's definitely too heavy for either wind or mouse to have delivered it. It's an unlikely spot for a bird to have landed. Do squirrels eat meat? The most likely scenario is that a person climbed up the fire escape and left it there. But why would anyone do that?

The mystery is compounded by the chicken bones on the first floor window ledge. For more than two years now, chicken bones have been appearing on the ledge outside one of the first floor windows of this house. No one has ever been seen leaving them there. At first it was assumed that someone in the neighborhood was eating chicken while walking home from La Cazuela or KFC and randomly decided to leave the chicken bones on the window ledge. Then it was thought that maybe this was some sort of prank. But now it's just plain weird.
Posted by Raechel Guest at 10:30 PM 2 comments:

Email ThisBlogThis!Share to TwitterShare to FacebookShare to Pinterest
Labels: Neighborhoods

I made the big effort to get my blog going, and then I was waylaid by a sick cat who needed my constant attention (which, now that I think about it, is not really all that different from normal cat behavior...). The cat, while not yet fully recovered, no longer seems to be in immediate danger of dying. Over the next few days, I'll be adding posts that I had originally intended to write nearly a week ago.

On a related note: the Banfield Pet Hospital is absolutely wonderful! My cat is receiving better treatment from them for her mystery illness than I did from the doctors I saw when I had lyme disease many years ago. They are professional, thorough, respectful and sympathetic. I am very grateful that they were recommended to me.
Posted by Raechel Guest at 11:11 PM No comments:

My vote is cast. Now it's time to wait for the results. I'm still a little annoyed at not having been able to find information on any of the candidates other than those running for Mayor and Board of Aldermen. The Republican-American newspaper sometimes prints "special sections" focusing on single topics ("Autumn Lifestyles"; "Careers and Education 2005"; "The Great Flood of 1955"). I'm really surprised that they didn't do a special section for all of the elections in this region. It would have been extremely useful, especially if it were in Spanish as well as English. It could have been published on the Sunday before the election (and posted online!), detailing all of the candidates for every position in all of the towns they cover. They could have even included descriptions of the different elected offices to help voters determine if the candidates are qualified. The Observer's October issue claimed to focus on Election 2005, and it did have really great interviews with the mayoral candidates, but they really should have covered all of the other candidates as well.

I hear a lot in the news about voter apathy and low voter turnout. I can't help but wonder if it's not due, at least in part, to how difficult it is to be informed about the candidates and their qualifications.
Posted by Raechel Guest at 5:10 PM No comments:

Three days until the election. So far I've received letters from DePillo, Tremaglio, Jarjura and Mulcahy asking for my support. I've also received phone calls from the recorded voices of DePillo and Mulcahy. The Republican-American newspaper has done numerous stories about the feud between Jarjura and Mulcahy. I've seen commercials on television: Jarjura demonstrating how simple it is to write in his name, and Ivelisse Cruz standing with the rest of "team Tremaglio" asking for my support. I've read interviews with the mayoral candidates in The Observer, and I caught part of a series of interviews with the mayoral candidates on WATR.

Today I downloaded the sample ballot (which I found on the Republican-American website, not on the city's website; as far as I can tell, the city's website does not provide sample ballots). It turns out that I will also be voting for Town Clerk, City Clerk, City Sheriff, nine members of the Board of Aldermen and three members of the Board of Education. Okay, this wasn't a total surprise: DePillo's mailing had photographs of his party's candidates, and Tremaglio comes as a "team." But it is the first time the full roster was laid out for me.

How am I (and the other voters of Waterbury) supposed to make a decision about these 52 candidates? Waterbury's Democrats have no information about the election on their website. The Republicans don't seem to have a website at all. The Concerned Citizens' website has no local candidate information. The website for the Working Families party profiles only two candidates from across the state, neither of whom are in Waterbury.

DePillo's website has a "Meet the Candidates" section, but only 9 of his running mates have any information posted. That information ranges from short biographical blurbs to full resumes. Only three candidates bothered to explain why they were running for election. So, out of 52 people running for political office in Waterbury, not counting mayoral candidates, only 3 have given me reasons to vote for them.

I really hope that the rest of Waterbury knows how to find information about the 52 non-mayoral candidates. Maybe there's something I missed.
Posted by Raechel Guest at 6:35 PM 2 comments:

An Iconic image of Waterbury 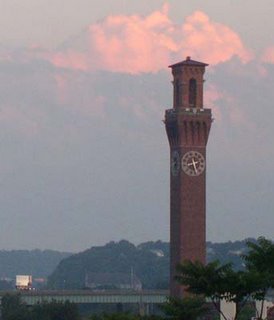 Posted by Raechel Guest at 1:56 PM No comments: