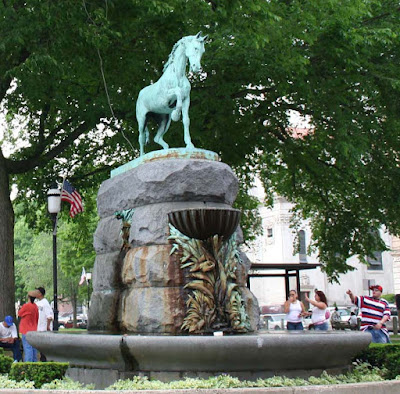 The publication of Charles Monagan's novel about Carrie Welton has inspired renewed interest in the statue of a horse on the Green downtown. The novel is very good--I highly recommend reading it, especially if you have any interest at all in Waterbury's history. It blends fiction seamlessly with historical fact, making the past come alive. The Silas Bronson Library has copies of the book available to borrow. You can also buy a copy at John Bale Books on Grand Street, the Mattatuck Museum on the Green, or online at Amazon.com.

For whatever reason, I have always been very passionate about defending the horse that was the inspiration for the statue. If you're not familiar with the story, here's the gist of it: the horse was modeled after Knight, Carrie Welton's favorite horse; Knight, however, was responsible for the death of Carrie's father, Joseph Welton. The condensed version of the story, as it is often told, is "that's Carrie Welton's horse Knight, who killed her father." Very dramatic and memorable, but the full story is more nuanced.

It's Halloween, so what better time to look for stories of ghosts, goblins, and haunted houses in Waterbury? Here's what I've been able to find so far.

The New-York Gazette reported a bizarre story on September 10, 1770: "We hear from Waterbury, that a Woman of that Town, who in the fourth or fifth Month of her Pregnancy, was taken with a most violent Longing to eat the Flesh from her husband's Arms---he indulged her in making several Attempts, but her Teeth were not sufficient for her Purpose;---and her accountable Longing continued until her Deliver, which was about three Weeks ago. The infant refusing the Breast, or any other Sustenance usually given to Infants, it was offered the raw Flesh of a Fowl, cut fine and dipt in the Fowl's Blood; on which it has fed heartily every Day since its Birth, and is the only Food the Child has taken, till a few Days since, when it eat a little Milk mixt with Blood."

Construction on the Green

The big public works project right now is the reconstruction of the Green downtown. The Green has been fenced off, and so far they've removed most of the sidewalks, lamp posts, benches, wood stanchions, and a few trees.

Email ThisBlogThis!Share to TwitterShare to FacebookShare to Pinterest
Labels: Developments, Downtown, Out and About, Parks

I've always taken it for granted that, of course, everyone has a library card. Why wouldn't you? As it turns out, however, only about a third of the residents of Waterbury have a library card, and more than half of those cards are expired.

In the past year, people have told me they don't use the library because their kids are all grown up, or because they think there's nothing for them at the library. In fact, there is something for everyone at the Silas Bronson Library. Take a look at this list, and I think you'll see something that appeals to you:

The war in Europe began with Germany's invasion of Poland and the subsequent declarations of war against Germany by Great Britain and France in September, 1939. On the other side of the Atlantic Ocean, the United States remained neutral until December, 1941, when Japan bombed our military base at Pearl Harbor.

In 1940, as the war raged on, the United States began taking in refugees. Children from Great Britain were the first to be welcomed, sent away by their parents in the hopes that they would escape the bombings and the possible impending invasion. (If you're a fan of the Narnia Chronicles, this might sound familiar--the Pevensie children were sent away to the English countryside to escape the Nazi bombings of London.) The U.S. government found itself balancing citizen enthusiasm for taking in refugee children with the slow bureaucratic requirements of the immigration laws ("Mayor Spellacy Gets Assurance," Waterbury Democrat, 13 July 1940).

Immigrants from Asia fared somewhat better in Waterbury during the late 1800s and early 1900s than did immigrants from Europe, most likely because they came here in small numbers, drawing less attention to themselves. In 1901, the Hartford Courant mentioned in passing that the only Chinese woman in Connecticut lived in Waterbury, running a store with her husband. The paper did not bother to print their names.

Russian and Italian immigrants were often grouped together as anarchists, perhaps because many of them were socialists advocating for improved labor rights. Russian socialists were referred to as Bolsheviks, the Russian political party led by Lenin which seized control of the Russian government in October 1917. Within a year's time, newspapers across the United States were instilling a fear of the "red terror," Bolshevism, in the hearts of their readers.

After a surge in immigration from Italy during the 1880s, Italians became closely associated with anarchy, socialism, and general crime from the 1890s to the 1930s. "Italian anarchists" is a phrase that was frequently repeated in the newspapers, as was "Italian radical."

Just as the Irish were reviled during the 1850s, new groups from Europe were reviled during the early 1900s. In 1904, Rev. Joel S. Ives of Hartford preached against immigration ("Connecticut's Immigrant Problem," Boston Evening Transcript, 23 March 1904), declaring that the problem wasn't the large number of immigrants arriving from Europe, but the poor character of the immigrants. He claimed "I have seen no foreign country with worse appearing settlements of foreigners" than what he saw in New Haven. Ives targeted Catholics Italians and Poles, and Russian Jews.

A Century of Melting Pot Frictions, Part One

As someone who was a child during the 1970s, I have long embraced the melting pot metaphor of this country, thanks in part to a School House Rock video and Disneyland's It's A Small World ride. One of the things that makes America great is our diversity, our ability to integrate people of different faiths and customs into our country. While other nations are torn apart by warfare and genocide stemming from their inability to get along with people of different religions and ethnicities, we have dozens of religions and ethnicities living together in relative harmony. Yes, we still have room for improvement, but overall, we're doing pretty well.

As someone who has immersed herself in historical studies for decades, I have an instinct to compare current events to historical events. Despite the rosy image of the melting pot, our country's history is one in which new groups of immigrants often face a long uphill struggle toward acceptance and integration. Political rhetoric can easily turn to oppressive action. Studying what happened in the past can help us today. We can learn from the mistakes of the past and make better choices in the future.

It's fairly well known that Irish Catholics faced severe discrimination for decades after they began to arrive here in large numbers. Italians weren't considered "white" when they first arrived. Germans were vilified during World War I, to the point that some of them even claimed to be Swiss rather than German. Distrust of Russian immigrants began after World War I and continued through most of the century, thanks to the Cold War. During World War II, Japanese Americans were so distrusted, our government (their government) took away everything they had and locked them up in internment camps.

To a degree, Waterbury has historically been more welcoming of foreigners than many other communities in the United States, largely because the factories eagerly welcomed immigrant laborers to their workforce. The city's success was dependent upon the continual influx of new workers to the factories. But each new immigrant group was met with suspicion, fear, and prejudice as they made their presence known in Waterbury.

There's a great new co-op storefront in downtown Waterbury: The Crafter's Classroom, 106 Grand Street. They opened with a ribbon cutting on Friday, and they already have some fun classes being booked. 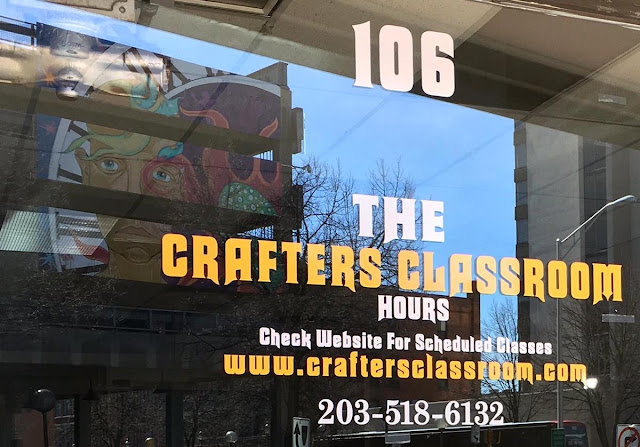 A couple of months ago, I happened to be checking out the Seven Angels Theatre website and was pleasantly surprised to see that Lou Diamond Phillips would be starring in the world premiere of his new play, Burning Desire, right here in Waterbury. Now, I'm not by any means a fangirl of actors. I don't get starstruck. But when I saw that Lou Diamond Phillips (who was so wonderful in La Bamba, Stand and Deliver, Young Guns, a guest appearance on Psych, and now on Longmire) was going to be performing here in Waterbury, at Seven Angels, I immediately bought tickets.

Email ThisBlogThis!Share to TwitterShare to FacebookShare to Pinterest
Labels: Actors, Arts, Out and About

I've started a Waterbury Instagram account, where I will be posting photos of all that is beautiful or interesting in the Brass City. I'll be posting at least one photo a day. 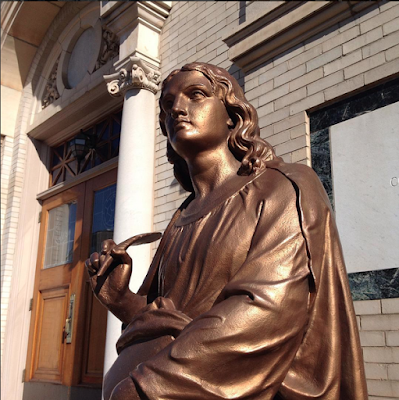 Posted by Raechel Guest at 10:06 AM No comments:

Email ThisBlogThis!Share to TwitterShare to FacebookShare to Pinterest
Labels: Blogging

I love walking in the snow, and today was a perfect day for doing just that.

Email ThisBlogThis!Share to TwitterShare to FacebookShare to Pinterest
Labels: Downtown, Out and About, Weather

I went back to high school yesterday to participate in a "Who Is My Neighbor?" workshop at Westover School's Rasin Center for Global Justice, sharing my experiences with blogging.
It's always interesting to get someone else's perspective on your work. One of the school's teachers commented afterward that I demonstrated to the students that the internet makes it easier to fulfill a civic responsibility to speak out and to have your voice heard, and that we must abide by an ethical standard of moral judgment and informed opinion (perhaps even more so, since what we post online is there for years). She made a very good point that we must combine moral judgment, informed opinion, and courage in order to be heard. You can write or say whatever you want, but if you aren't trustworthy, you won't be respected, and your voice won't be heard.