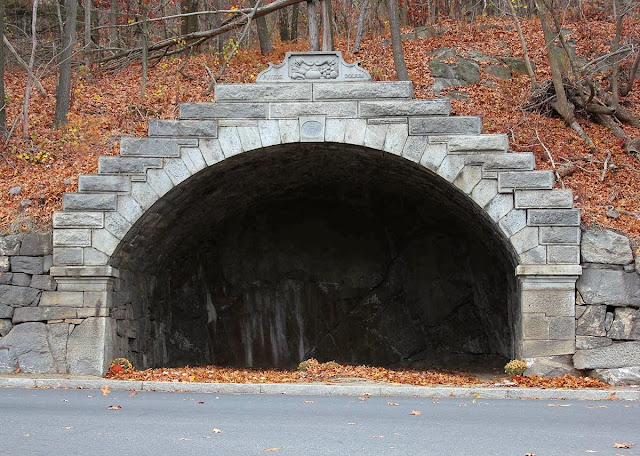 This is a landmark familiar to most people in Waterbury, a mysterious stone arch built into the side of a wooded hill on Wolcott Street near the intersection of Manor Avenue. It's familiar, but most people don't know why it was built. Years ago, I was told that it was built as a shelter and watering spot for horses needing to rest after pulling carts and trolleys up the long, steep hill. An informal survey on Facebook this week suggests that a lot of people have heard some version of that story. One person remembers it being used by a fruit and produce truck. A few people figured it was a trolley stop and, later, a bus stop.

The story of its origin can be found in Anderson's History of Waterbury, published in 1896. When it was new, this was a shed for storing lumber and carriages, part of a farm owned by Hobart Victory Welton. Here's an engraving of how it looked during the 1890s. There was a carved bird on top which is now gone (although possibly at the Mattatuck Museum). 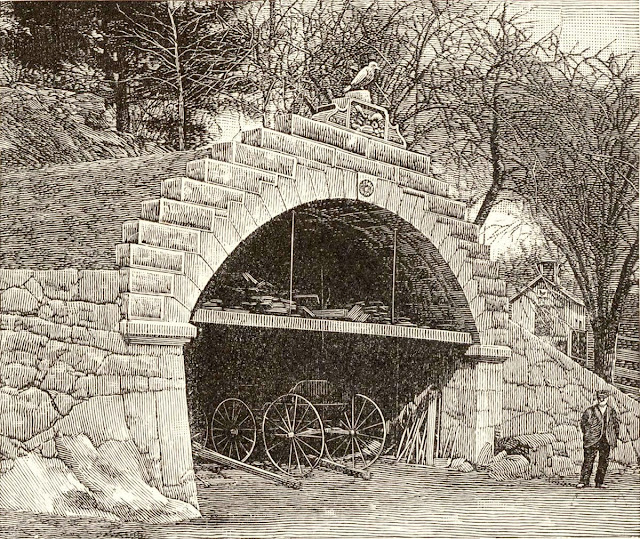 The shed was built in 1858; the date of its construction is engraved on a medallion on the front center of the arch, along with the Latin phrase Maneo ("I endure"). On the top center of the arch is decorative carving showing two cornucopias overflowing with fruits and vegetables--very appropriate for a farm--in between two Latin words: Puteus and Dolium. 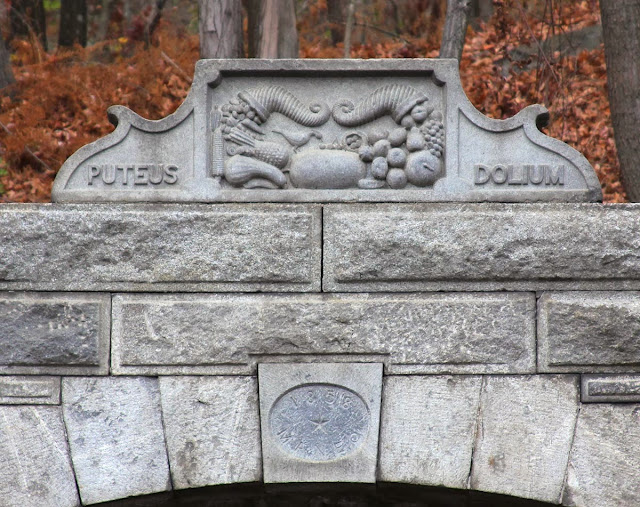 "Puteus Dolium" is a play on the name of the man who built the shed, Hobart Welton. Puteus translates to "well" and Dolium can be translated to "tun." Welton is not a name that exists in Latin, so Hobart invented a phrase to use as his name.

The carriage shed, an iconic structure for Waterbury residents, is now officially historic. It was added to the State Register of Historic Places on November 6, 2013, thanks in part to the efforts of the Bouley Manor Neighborhood Association, which contacted the Connecticut Trust for Historic Preservation during a recent survey of historic barns in Connecticut.


The origin of the stories about the shed being used as a watering spot for horses can be found to the north of the carriage shed, where Welton built a stone fountain for people and watering trough for horses. Again, here's an engraving of how it looked in the 1890s. 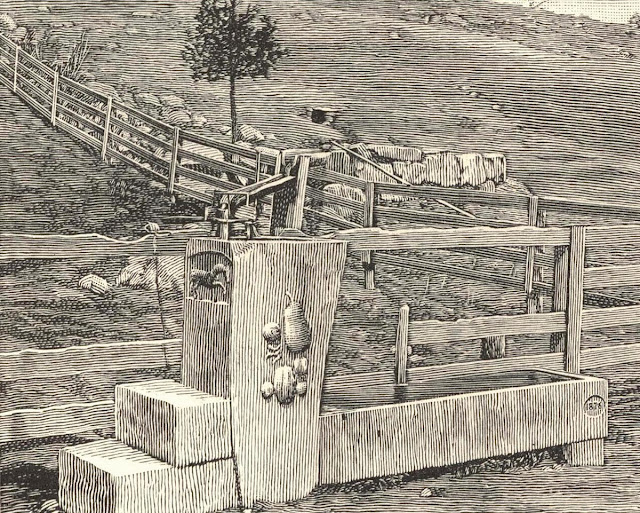 The watering trough was inscribed with the date of its construction: 1870. The fountain and trough was fed by a pipe running from a nearby spring. They remained in use until the 1970s, when the State Highway Department gave them to the Mattatuck Museum. This stretch of Wolcott Street was Route 69 from the 1930s until the 1960s. The carriage shed is still owned by the State Highway Department.

So who was Hobart Victory Welton? 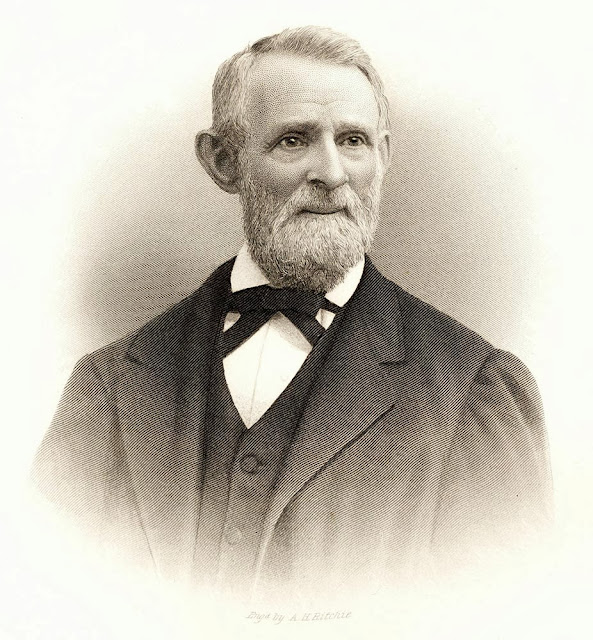 Born in Woodbury in 1811, Hobart moved to Waterbury when he was 8. His father was a retired minister, and the Welton family moved into a new farm house built on what is now the corner of Wolcott Street and Manor Avenue (opposite the carriage shed).


When Hobart was 14, his father died. Late in life, Hobart wrote that “If I were to write my own biography, to please myself only, it would be somewhat as follows: With an inborn taste for sculpture, but obliged from early youth to earn my own living, I have been of some service to society in my day and generation. Had I not been placed under such limitations, I might have been nothing more than a third-rate artist.”

As is the case with all artists, Hobart seems to have felt compelled to create his art, adding decorative flourishes everywhere on the Welton farm. Even the steps of his house were ornamented with fruit and lions' heads. 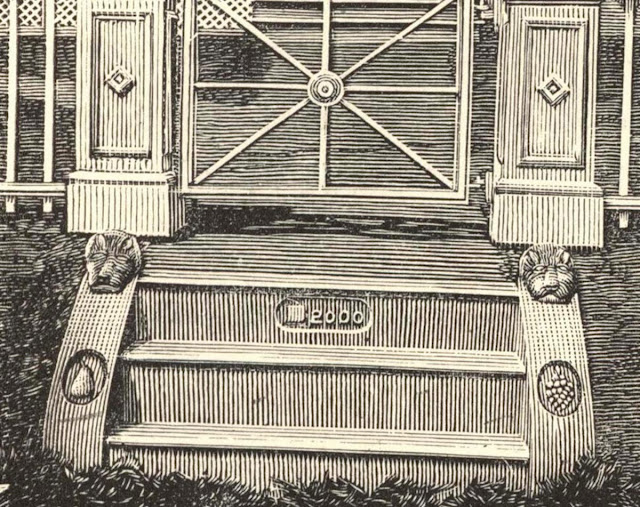 The lions' heads were salvaged and are preserved at the Mattatuck Museum.

There was also a carved wood gate on the Welton farm. More portable than his stone carvings, the gate has traveled the world. Recognized in 1940 as a classic example of American folk art by the Works Progress Administration, the Gate was exhibited at the Museum of Early American Folk Arts in New York City in 1966; at World Exposition in Osaka, Japan in 1970; and at the Whitney Museum of American Art in 1974. 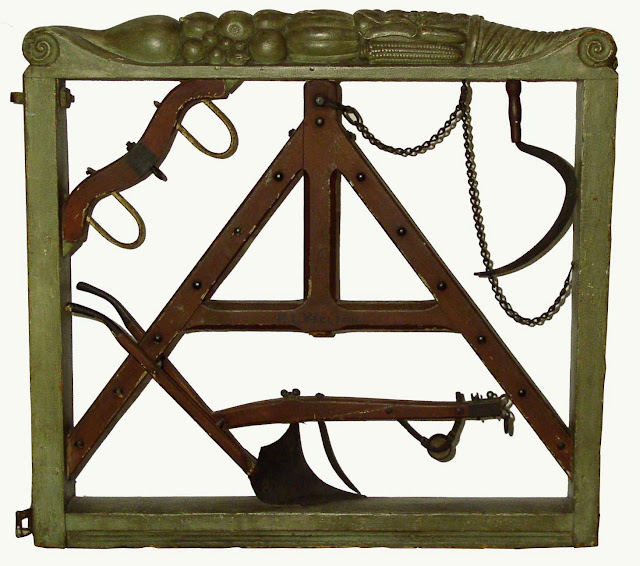 The Gate was donated to the Mattatuck Museum by the Welton family in 1938 and remains on view there today. It was designed with symbols of the farm: a yoke, sickle and chain, harrow, and plow. The top of the gate features a carved array of fruits and vegetables spilling out of a cornucopia.

While art was his passion, Hobart Victory Welton was equally accomplished as an engineer. He served as superintendent of the city roads for 25 years, oversaw the construction of a system of reservoirs on the Mad River to power brass factories, engineered Waterbury's first stone bridge with an arch in 1848, and engineered Connecticut's first iron bridge in 1863, built over the Naugatuck River at West Main Street. Welton served in the State Legislature in 1852 and 1853. He died in 1895, but his art continues to influence us today.
Posted by Raechel Guest at 3:00 PM 9 comments:

This blog post did not go in the direction I expected. I thought I would write up a quick analysis of this year's election results. I thought I would comment on the remarkably low number of votes received by the Republican and Independent Mayoral candidates as indicative of specific problems with their campaign strategies.

Instead, I decided to find out just how much the voter turnout has really declined over the years, and how long this has been going on. What I found was stunning. If voter turnout continues to decline at the same rate that it's declined over the past fifty years, in another decade the only people who will vote in Waterbury's municipal elections are the candidates, members of the Town Committees, and their immediate circles of friends and family.

If we don't change what we're doing, in ten years our voter turnout could be reduced to maybe 3,000 people.

That sounds extreme, but take a look at the table below, and you'll see why it might be reality.