I think I first started hearing Tom Gessler's name a year or two ago. I don't know a lot about him directly, except the "buzz" that he's a New York real estate investor who owns a few properties in downtown Waterbury. The other major downtown property owner is Phil Nargi, who lives in Waterbury and hangs out downtown. While I certainly don't agree with everything Nargi's said and done, at least he's involved in the community. I don't know that I've ever seen Gessler around, and I have no idea where he lives. He has a couple of companies for his investments, but when I try to research them online, it's like they don't exist. Gessler's name appears nowhere in the city assessor's website.

I did a little further digging, and found that Gessler, through the guise of "Leavenworth & West Main, LLC", based in Hamden, is the owner of the former Mattatuck Museum building at 119 West Main Street. Gessler purchased the building many years ago and almost immediately replaced the beautiful wrought iron fence with a chain link fence nailed a board over the front door, effectively defacing the oldest building on the Green. Nothing has been done with the building since then. I can't help but wonder what he did with the original fence. Is it stored on site or did he sell it?

Gessler also owns the property where the city Health Department currently rents space (on a side note: why are city departments renting space? this makes no economic sense at all!). When their lease was about to expire, they naturally started looking for cheaper rent. They found it on Bank Street, in the former Jones Morgan building, which is owned by Phil Nargi. The city agreed to lease office and clinic space from Nargi. When Gessler found out he was losing his tenant, he threw a fit and started complaining to everyone he could. This launched the enormous public debate over the location of the health clinic earlier this year. (Please don't take my chronology as hard fact--this is my second and third hand reconstruction of what happened.) Gessler's supporters insisted that moving the health clinic from Scovill Street to Bank Street would destroy downtown development. Lynnette Letsky-Piombo addressed the Board of Aldermen and said that Gessler is planning to invest $7.5 million in downtown Waterbury, therefore we should do what he wants. This was the most chilling, disturbing thing I had heard in a long time. I know I'm exaggerating here, but how is this different from prostitution? Do whatever he wants, because he says he's going to pay enough money later on?

This past week, the Board of Aldermen finally voted to honor the contract with Nargi for the Health Center to move to Bank Street. In my mind, that debate boiled down to a couple of key ingredients: the vast majority of downtown business owners spoke out in favor of the move; and the city had already entered into an agreement for the new lease. Gessler responded to the BoA vote by throwing a staged tantrum. He claims that the relocation of the Health Clinic to Bank Street makes the Lombard Building, at Exchange Place, a bad investment for him. Therefore, he will no longer continue his negotiations to purchase, renovate and enlarge (with two new floors) that building. Seventy-five downtown merchants believe the relocation will improve business downtown. And, as the Republican-American pointed out, Gessler's negotiations to purchase the Lombard Building were already in jeopardy, given that the building is chock-full of asbestos and other toxins. Sounds to me like he's using the clinic move as an excuse to back out of his deal. Just as well, as far as I'm concerned. Downtown Waterbury is full of empty upper stories. Adding two more floors to the Lombard Building is not what downtown needs.

Gessler doesn't seem to be doing any good for Waterbury. He's defaced a well-loved historic building, attempted to manipulate the proper course of government through sleazy tactics, and there's no indication that he's involved with or cares about the community. Maybe I'm completely wrong about him, but I really have not seen or heard anything about him to make me think that he's worth having in town. Hm. Okay, I take that back. He does seem to hire good property managers. Much better than Sy Management, which is constantly in the news for not maintaining the basic necessities in their buildings. But decent property management doesn't make up for Gessler's low points. Waterbury deserves better.
Posted by Raechel Guest at 11:06 PM 4 comments:

The latest bar buzz in town is that the new owners of T-Pic's have declared the bar to be smoke-free. For all of us non-smokers who like no-frills, cheap bars that aren't overpopulated with 21-year-olds, this is great news. The smokers are feeling a little sad about it, but there probably are a couple of other places in the region that still ignore the no-smoking law. If not, well, I guess they'll have to stay home or curb their habit. 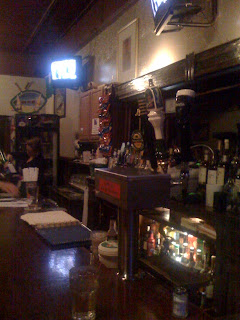 Hamlet in the Park 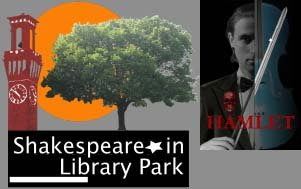 The annual performance in Library Park by Shakesperience Productions, Inc. begins this Thursday, June 19. They do a different performance every year--this time it's Hamlet. I tried to persuade them to cast me in the lead role, but Dan wouldn't have it, so instead I will content myself with being in the audience.

Picnic dinners can be purchased from the JoBa Cafe. Performances will be held June 19-21 and June 26-28. Picknicking at 6pm, performance at 6:30.

Here are some photos from the June 19 performance: 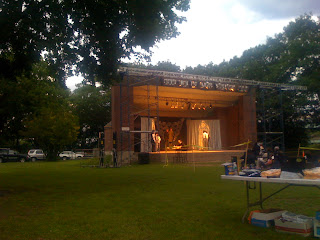 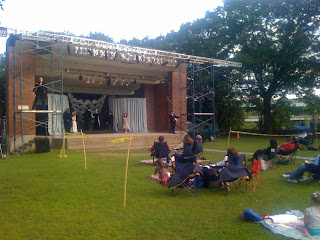 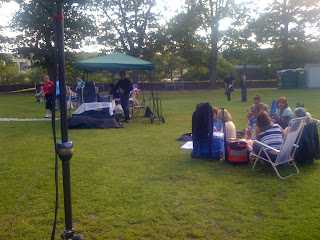 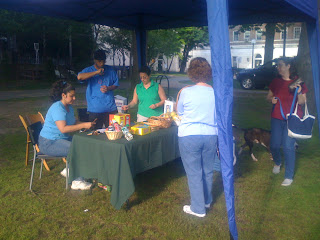 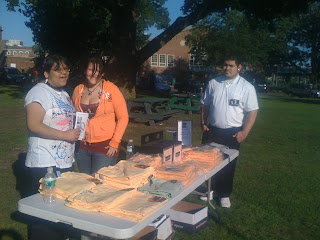 Posted by Raechel Guest at 10:51 AM No comments:

Long Hill Road has never been great for pedestrians. Only half the road has sidewalks, and most of the sidewalks are barely wide enough for one person, never mind someone in a wheelchair. The road isn't really wide enough for a shoulder, so pedestrians, whether on the sidewalk or the side of the road, are walking only a foot or two away from traffic that often goes much faster than the posted speed limit.

As if all of that weren't hazardous enough, now there are giant gouges where the road has washed out, primarily because the road was built without adequate drainage. 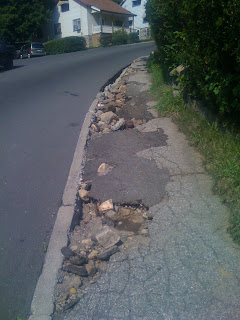 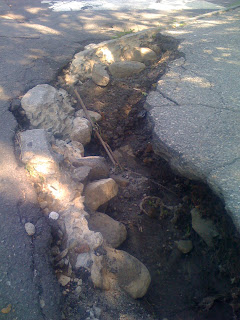 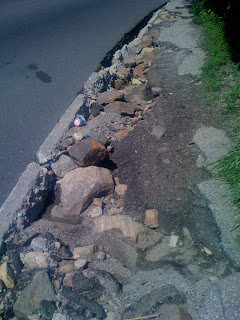 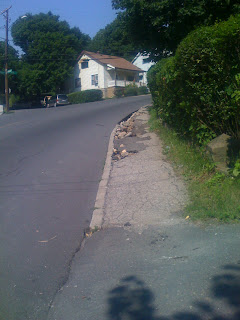 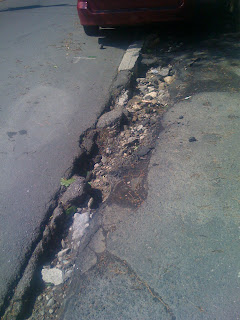 This next image is a storm drain (is that what they're called?) on Oak Street, next to Long Hill. I don't know how well you can see in the photo, but it is large enough for a young child to fall in. 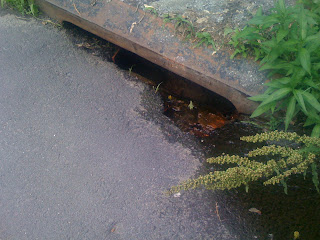 Posted by Raechel Guest at 5:03 PM No comments:

Email ThisBlogThis!Share to TwitterShare to FacebookShare to Pinterest
Labels: Out and About, Safety

Waterbury finally has a night life! Sin City's grand opening is July 3rd. Check them out at myspace.com/sincityct. 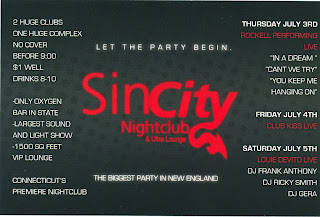 Email ThisBlogThis!Share to TwitterShare to FacebookShare to Pinterest
Labels: Events

The indoor water park at what is now the Holiday Inn waaay out East Main Street is nearing completion. Every time I drive by, I'm startled to see the construction. 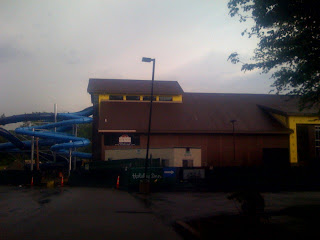 I believe its name is/will be Coco Key Water Resort. The corporation has similar indoor water parks in Boston, Chicago, Cincinnati and several other cities.

I guess we can add this to the list of things that make Waterbury a good place to be a kid!

Meanwhile.... While you wait for the water park to open, don't forget about Quassy Amusement Park, on the lake in Middlebury. They have a beach, paddle boats, a water slide, and a "saturation station" to keep you waterlogged all summer!
Posted by Raechel Guest at 6:37 PM 2 comments:

Saturday, June 14, is Connecticut Open House Day. Museums and other arts organizations around the state will be free to all visitors this day. Many will be offering special programs. Participating organizations here in Waterbury include:

House on the Hill B&B (this is one of the great old homes of the Hillside neighborhood--definitely worth a visit!)
Mattatuck Museum
Palace Theater
Seven Angels Theatre
Timex Museum
Waterbury Symphony Orchestra

Be sure to check for their hours before dropping by!
Posted by Raechel Guest at 8:19 PM No comments:

State of the Groceries

Waterbury's down another grocery store with the closing of Price Chopper this month. According to the company, they are closing the store because it has been "under performing." That seems a little fishy, considering that it's been voted best grocery store in Waterbury. Perhaps not coincidentally, there have apparently been ongoing squabbling between Waterbury's Price Chopper and the United Food & Commercial Workers Union (Local 371). Maybe a month before Price Chopper announced that they would be closing the Waterbury store, Waterbury residents received a postcard mailing from the union asking us not to shop at Price Chopper, because the store "pays non-union substandard wages." I vaguely remember the union doing a similar mailing and newspaper advertising roughly a year ago. Maybe the union protest had more to do with the store closing than anything else.

Meanwhile, a new grocery store has opened downtown in the Colonial Plaza on Thomaston Avenue. Compare Foods is really great. The prices are low and the selection is fantastic. An article in the Republican-American about their opening stated the the manager spent a year studying Waterbury's communities and shopping habits, and has tried to meet the grocery needs of everyone. I can't speak for anyone else, but the store definitely does what I need. There are only one or two things I buy that they don't carry, and there are things they carry that I like and can't find anywhere else. The grocery store that preceded Compare Foods at the same site was very poorly managed (raw fish being sold from display stands in the middle of the store, rotting away). Compare Foods is nothing at all like that store--it's clean, well-stocked, and has great customer service.

Another new grocery topic is at Stop & Shop. They've gone "green" with their bags. If you purchase a green shopping bag for 99¢, every time you use it, you get five cents back. It doesn't take long for the bags to pay for themselves, and they are much better for carrying groceries than standard bags. The only glitch is that they aren't really all that green: they're made out of polypropylene. They're durable, but they're made from a substance that is not biodegradable and are not considered ecofriendly. Oops.
Posted by Raechel Guest at 9:57 PM 6 comments: