Two of the things I love best about Waterbury are its summertime ethnic festivals and its diversity of culture and food, so I was delighted to learn that the West Indian Social Club of Greater Waterbury was launching an annual Jerk Festival. I had a busy day, but I made time to swing by the festival for lunch and take a few photos. 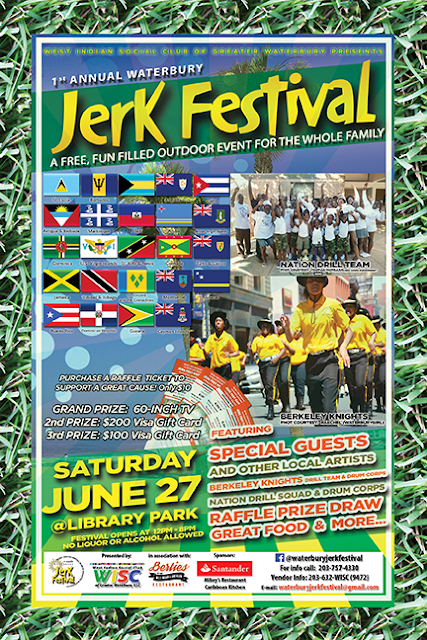 For those who are unfamiliar with the term, "jerk" is a spicy Caribbean dry-rub barbeque (in simplest terms).

Connecticut has the sixth largest non-Hispanic West Indian population in the U.S., with 87,149 immigrants reported in the 2010 Census.

A 2013 Census report estimates that Waterbury has 3,304 non-Hispanic immigrants from the West Indies, with 2,185 of those people coming from Jamaica.

Email ThisBlogThis!Share to TwitterShare to FacebookShare to Pinterest
Labels: Demographics, Events, Food, Out and About

The latest issue of Connecticut Explored magazine features an article about some of Connecticut's historic bridges, and it reminded me that Waterbury has two of the state's 45+ bridges listed on the National Register of Historic Places.