Waterbury and the Underground Railroad

During the decades leading up to the Civil War, the anti-slavery (abolition) movement became increasingly influential. In Connecticut, slavery was gradually phased out. The last person to be enslaved in Waterbury was given her freedom shortly after 1810. In 1840, there were seventeen people enslaved in Connecticut; in 1848, the state finally outlawed slavery completely. Additionally, a Connecticut law from 1844 prohibited any fugitive slave escaping to this state from being arrested or detained and returned to his owner.

It's tempting to pat ourselves on the back and feel good about Connecticut having given up slavery before the Civil War, but it's very misleading to think that all of Connecticut opposed slavery. Throughout the state, some were adamantly opposed, viewing slavery as an evil to be eradicated, but many were ambivalent--slavery was an abstract concept, something that happened far away, something that didn't impact them directly.

In Waterbury, as in every other town in Connecticut, there were people who supported the right of southern states to continue slavery. Green Kendrick, one of Waterbury's most prominent citizens, was originally from North Carolina and was a public supporter of slavery. Kendrick was also a supporter of sending free blacks to Liberia, donating to the American Colonization Society in 1858.

From Waterbury, refugees most likely continued on to Plymouth, then to Torrington and Winsted, continuing north until they reached Canada. It was a dangerous, furtive path to take, with no guarantees of safety.

In 1860, a refugee, traveling alone, made it as far as Stamford, where he hired someone with a wagon to take him to Norwalk (the story was related in the Columbian Register newspaper, January 28, 1860). The refugee, unnamed in the newspaper article, for unknown reasons (but we can imagine!), suddenly leapt out of the wagon, leaving his coat behind. The wagon driver rifled through his pockets, decided that he must be an escaped criminal, and chased him into a Presbyterian Church. Apparently the man was briefly held captive, until a Trustee of the church arrived, figured out that he was an escaped slave from Charlestown, Virginia, and ordered him to be set free. The story had a happy ending, with the refugee given a place to stay for the night and safe passage to an underground railroad station, but it highlights some of the risks involved.

Back in Waterbury, Timothy Porter, a deacon in the Baptist church (and grandfather of Carrie Welton), was a firm believer that slavery was wrong. Beginning around 1840, Porter decided that abolishing slavery was his mission in life. For the next two decades, he hosted anti-slavery meetings in his home and, on one memorable occasion, publicly debated the topic with Green Kendrick. Porter also helped escaped slaves on their journey to freedom in Canada, using his home as a stop on the Underground Railroad. I have not yet been able to identify where his house was; the building is unlikely to still be standing, but it is still worthwhile to track down the approximate location.

Timothy Porter's opposition to slavery may have been shaped by his family history. His great-uncle was Dr. Preserved Porter, a slave owner who, when one of his slaves, a man named Fortune, died, chose to dissect the body, boiling the bones and keeping them for medical study. Fortune's skeleton remained with Dr. Porter's son--Timothy Porter was six when Fortune died, and would have been well aware of what happened to him.


John Miles Stocking, a deacon in the Congregational church, was the other Waterbury abolitionist who was active in the Underground Railroad. Stocking had a barn which he used as a resting station for escaped slaves. Stocking raised his children to be anti-slavery, reading Uncle Tom's Cabin and other abolitionist material to them. The Stocking family took pride in knowing that every eligible man in their family served during the Civil war.

After many years of complaints from the WOW neighborhood, the abandoned, blighted building at the corner of Wood and Walnut Streets has finally been torn down!

The first time I wrote about this building was in 2009. I was appalled that this was a school bus stop. What clearer symbol of an uncaring city government could there be than requiring elementary school children to wait for the bus next to a building that looked like it was about to collapse on them?

I wrote about it again in 2011. Then-Mayor Jarjura had attended a WOW community meeting and had promised to tear down both of the buildings at the corner of Wood and Walnut Streets. Only one of the two buildings was torn down. The one at the bus stop, the one blocking drivers' view of traffic, was left standing.

Now, finally, the problem building is gone. Thank you to whoever authorized its demolition! 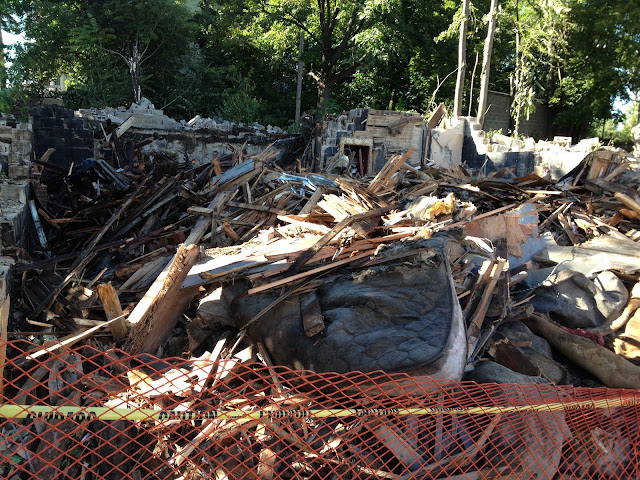 Of course, the question remains: what comes next? Will the lot remain empty and abandoned? If a new building is constructed at the site, will it be set back from the road, or will the builders use the same footprint? I certainly hope not. In a residential neighborhood, even in a small city like Waterbury, buildings that are constructed right up against the street, leaving barely enough room for a sidewalk, are a bad idea.

There are two pre-fab duplex houses being built by WDC at the same intersection, diagonally across from the blighted building that was just torn down. They're set back from the road, surrounded by enough yard to make them feel comfortable, not packed in tight like sardines. Even buildings need elbow room. 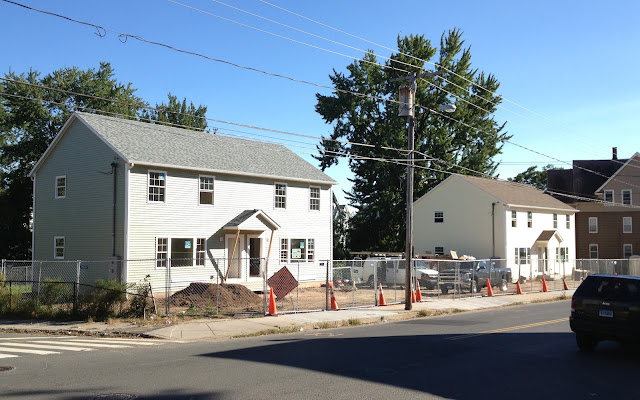 Posted by Raechel Guest at 8:29 PM No comments:

There's been a lot in the news this week about the burial of Mr. Fortune, a man who was enslaved in Waterbury more than 200 years ago. About a decade ago, when I worked at the Mattatuck Museum, I spent a lot of time researching his life, his family, and the lives of other people who were enslaved here. I spent a lot of time with his skeleton, handling the bones, assisting with the project as I could. I spent a lot of time wondering exactly what happened when he died, what happened to his flesh after it was stripped from the bones, how his wife and children reacted to the trauma of his death and dismemberment.

His story has stayed with me all these years. Every so often, I pour through archival records, looking for any hint of what happened to Dinah, Roxa, Mira, Jacob, and Africa. They all left or were sent away from Waterbury soon after Fortune's death. How could they stay with his bones lying out for them to see?

Earlier today, someone posted a link on Facebook and Twitter to Mr. Fortune's obituary in the Rep-Am . I hadn't read it yet, so I clicked on the link. The obituary was sparse, and I soon found myself reading three comments posted by anonymous readers. The comments made me ill. The "authors" were apparently outraged that an African American, who had suffered outrageous treatment sanctioned by the state during his life and during his death, was finally being honored and laid to rest. A sacred moment in history was being denigrated by a trio of ignorant people who were more concerned about pushing their agenda than respecting the weight of history.

I normally avoid engaging internet trolls in any form of discussion, but I felt obligated to at least try to show them why the events of this week, of Mr. Fortune lying in state at the Capitol, of being escorted back to Waterbury, of his funeral being national news, were so important. Weirdly, the most long-winded of the trio accused me of being a racist and claimed that I had accused him of the same.

Perhaps foolishly, I read more of the comments posted to articles about Fortune on the Rep-Am website. Many of them were steeped in disturbing resentment towards African Americans. I've been pondering this all evening. How could such a powerful, beautiful day inspire such venom?

We've come a long way in race relations, but we still have a ways to go.
Posted by Raechel Guest at 11:11 PM No comments: