The monument's dedication is steeped in early 20th century popular mythology about the Pilgrims, and the late 19th century belief that white Protestant Americans, especially the New England Congregationalists, were God's chosen people: "Moved by the illustrious record of the Pilgrim Fathers, the donor... dedicates this monument to the townspeople of Waterbury, to keep ever in mind the conquest of hardship and adversity, through virile Christian character, and unflinching loyalty to Almighty God, on which was reared the structure of New England." 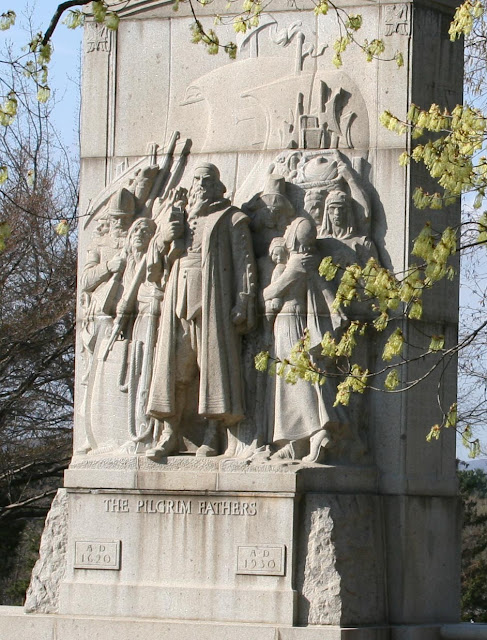 Sculptor Hermon Atkins MacNeil was commissioned to create the monument. Based in New York City, MacNeil is remembered for having designed the 1917 quarter, as well as for a series of sculptures depicting Native Americans in classically heroic poses.

The Harrub Memorial was completed in 1930 and unveiled at a ceremony held on October 11, 1930. Although it is now located at the top of Chase Park, off Highland Avenue, the monument was originally placed at the bottom of the hill, facing Freight Street.

Chase Park was very different before the construction of Route 8 and I-84 in the 1960s. Much of the park was lost to the highway construction, and an area of tremendous beauty and grandeur was turned into a utilitarian, unkempt roadway and highway interchange. I've posted a pair of "now and then" photos to show the difference:

Here's another view from 1930, showing the lovely, winding road that used to run along the Naugatuck River and up through Chase Park:


On a side note, Chase Parkway was originally a roadway, a scenic drive for those slow-moving cars of the 1920s and '30s.

Charles Harrub's estate was managed by his Masonic Brother Robert S. Walker. Both were members of Waterbury's Harmony No. 42, AF&AM. The amount of money for the monument was $100,000 ($1 million today) in 1924. and it was Robert Walker that hired MacNeil. Mr. Walker also created a Trust with the balance of his estate which continues to benefit Harmony, The Fist Baptist Church, and the Southmayd home annually. Charles Harrub made his fortune by perfecting the drip oiler on stationary engines and machinery. The oilers were typically young boys with an oil can prior to the invention of the drip oiler. His patent in on file.

As I recall this monument was originally located elsewhere and moved to Chase Park. I believe it the move occurred during construction of the RT84 & RT 8 interchange.