The latest chapter in the saga of Aldermen by District is unfolding this week. In a surprise move Monday, the city posted on their website a preliminary map showing possible boundaries for the new Aldermanic districts. Outrage and accusations of gerrymandering promptly ensued.

Based on what we we've been told up until now, we expected to be shown three different maps at a public meeting held at City Hall tomorrow night (Thursday, January 8, 6:30 p.m.). The publication of the preliminary map on Monday was done without explanation. At first I thought maybe it was put online by mistake. Then I thought maybe it was a ploy--show your client the worst draft first, so that anything you them afterwards looks that much better. Either way, I figured I would wait to render judgment until after all three maps are unveiled on Thursday.

Now, however, for whatever reason, it seems that the process has been changed. John Murray of the Waterbury Observer spoke this afternoon with Dr. Peter Morrison, the demographer hired to oversee the project and was able to get an update on what is now happening.

According to what Dr. Morrison told the Observer, the map that went online Monday is the starting map. It was drawn to create five districts of approximately equal population and to protect minority voting blocks. Dr. Morrison is looking for feedback on this first map at tomorrow night's meeting, and has stated that he will then draw up three maps to be presented at the next meeting on January 14.

I think there are going to be quite a few angry people at tomorrow night's meeting. It's very easy to get bogged down in the details of this apparent sleight-of-hand. According to the official published information about the meeting schedule, we'll be presented with three maps tomorrow night, and we'll be able to comment on the maps at meetings held on January 14 and January 22. If John Murray hadn't tracked down Dr. Morrison and gotten a verbal update, we'd all be going into tomorrow night's meeting expecting to see three maps, and many of us wouldn't have our comments about the preliminary map ready. This is a massive lack of transparency. Either somebody screwed up, or somebody was trying to unfairly control the outcome. (Personally, I figure it was a screw up. The process is rushed, so mistakes are bound to happen.)


At this point, the most important thing is for everyone to give their feedback on this first map. There are two ways to do this:

2. Review the map online and submit your comments through the City website; you can either fill in a submission form, or you can email comments@waterburyct.org. 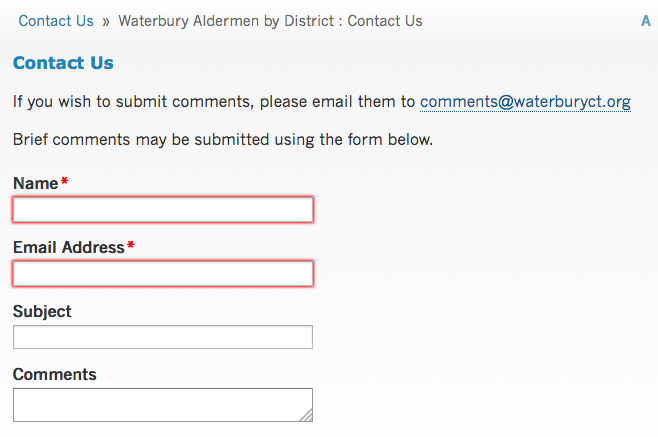 Now on to my thoughts about the first map.

The map is, surprisingly, very similar to my hypothetical "map of doom," which I drew up in an attempt to show what a gerrymandered map might look like (see previous post). According to Dr. Morrison, the map primarily focused on adhering to legal requirements regarding minority voting protections.

Here's the first map. I've added the names and party affiliations of the incumbent Aldermen.


There are so many, many things wrong with this map. In no particular order, here are a handful of the problems:

1. The map gives the impression that it was drawn to protect three powerful Democrats.

If I zoom in on the map, you can see it better. For no clear reason, the orange 1st District include a sliver of Bunker Hill, stretching out to include Democrat Alderman Napoli. His equally powerful Democrat neighbors in Bunker Hill are placed in the 5th District, conveniently preventing the three of them from having to primary against one another. Dr. Morrison claims that he was unaware of this situation, but I can't imagine any other reason for drawing the map this way. 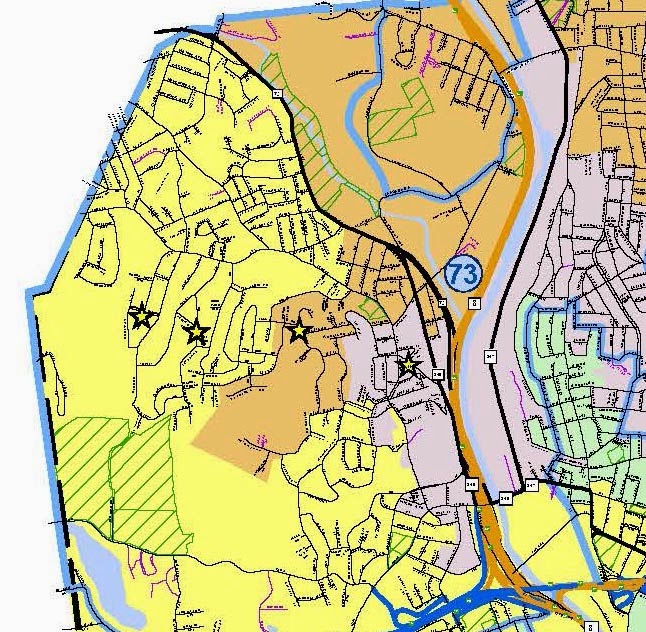 Let me make it clear, however, that I am not opposed to drawing the map to protect incumbents. However, it's only okay if ALL the incumbents are protected. No exceptions, no special treatment for anyone.


2. Dr. Morrison says that the minority voting blocks in the 72nd and 75th Legislative Districts have been protected. However, it can be argued that this map reduces opportunities for minorities to serve on the Board of Aldermen.

In the proposed 1st District (orange), Alderman Lopez, a Hispanic, would have to primary against Aldermen Napoli and Begnal, white men who have served on the Board of Aldermen for many years, and who would quite possibly defeat Alderman Lopez, who is in his first term on the Board and isn't as well known.

In the proposed 4th District (lavender), Alderman DePillo, a white man living in Bunker Hill, is more or less guaranteed to win reelection due to his popularity, making it that much harder for minority candidates in the 4th District to win election--one of the three seats is taken by a white incumbent who doesn't even live on the same side of town as the rest of the district. 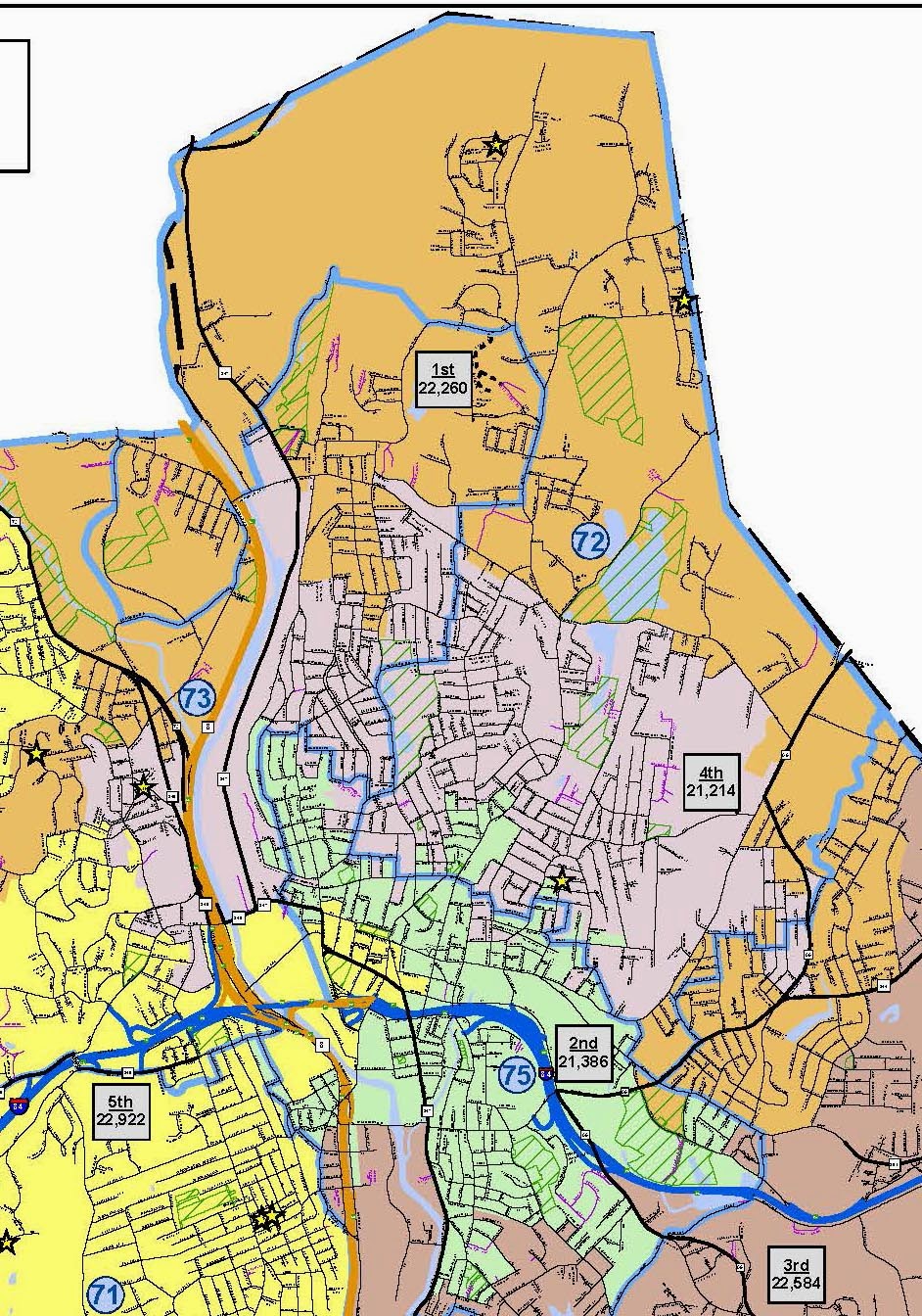 3. The 2nd and 4th Districts, which correspond to the 72nd and 75th State Legislative Districts, and which have the highest concentrations of minorities, have significantly smaller populations than the surrounding districts.

According to the map, the district population numbers are as follows:

Dr. Morrison claims that the 2nd and 4th Districts conform to laws protecting minority voters. If that's true, then why are those districts significantly smaller than the predominantly white neighborhoods?


4. There is no regard for neighborhood boundaries.


Downtown has been divided into three districts.

The WOW and Crownbrook neighborhoods have been divided into two districts which completely disregard both neighborhood boundaries and state legislative boundaries. 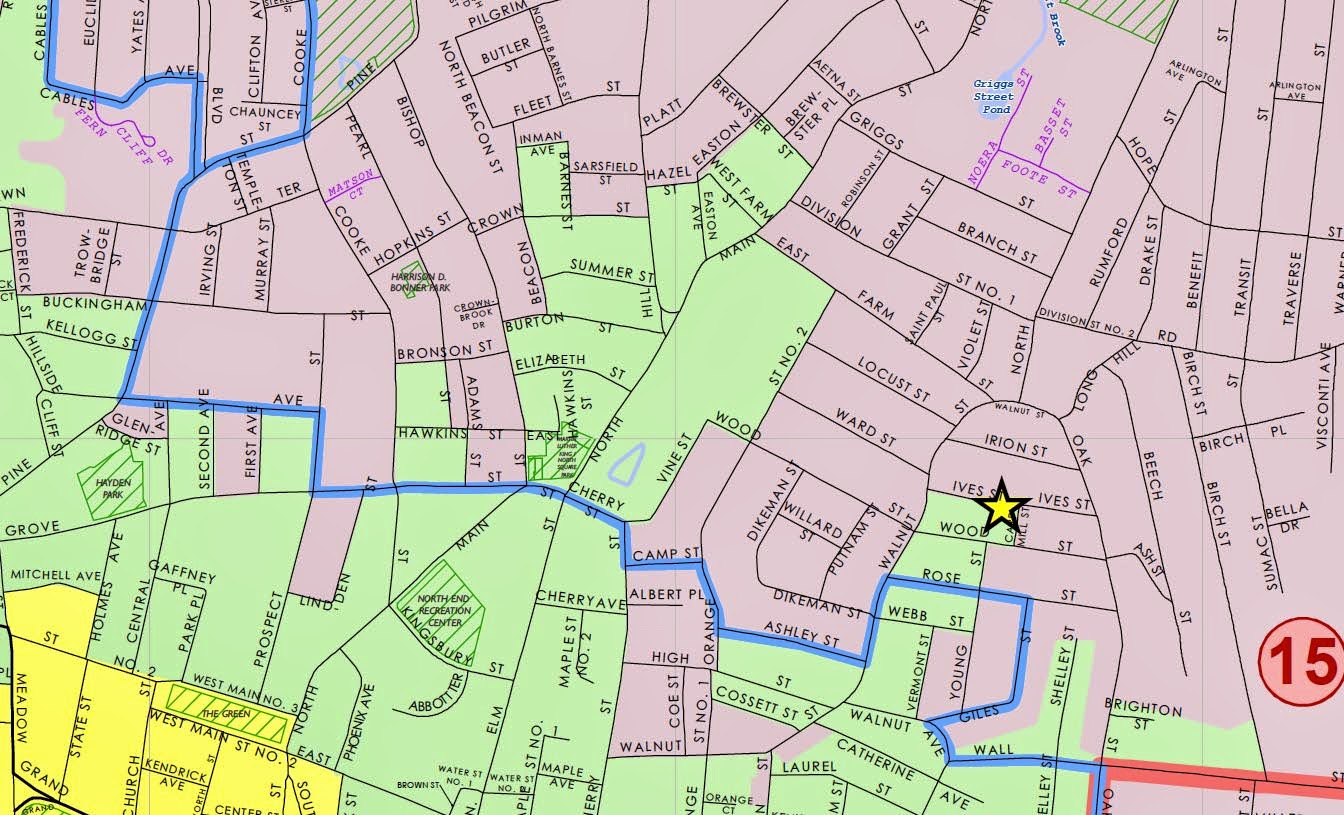 I could keep going, but I think you get the idea.

It's up to the people who live in the neighborhoods to tell Morrison and the Commissioners whether or not the proposed boundaries make sense. Participation is vital. Morrison isn't from here; he doesn't know Waterbury. If we don't tell him what's wrong with the map boundaries, we'll get something that doesn't work.

If you can't go to the January 8 meeting, send your feedback to comments@waterburyct.org. Be heard. Be involved.
Posted by Raechel Guest at 5:02 PM

Great article will you be able to bring a copy of the map with the alderman names to the meeting tonight. Thank you Chairman of the LNRC of CT Ruben Rodriguez